At The Camino Gateway

SAINT JEAN PIED-DE-PORT, FRANCE – I arrived in this ancient town after a pleasurable high-speed train (250kph/155 mph) journey from Barcelona to Pamplona. You have to credit the Spaniards for operating a top-notch rail system – clean, comfortable, on time to the minute, and with a movie shown during the trip.

In Pamplona I met my pre-arranged taxi for a somewhat nerve-wracking, 1:45 ride over the Pyrenees to St. Jean. I literally lost count of the number of switchbacks we went through because the scenery was so spectacular, but they seemed never ending. My driver must have had an ealier career at Le Mans as we took those curves at quite a rate, and in fact I arrived with a touch of motion sickness.

It seems you can do all the research you want, look at plenty of maps (including Google), as I did, and still miss the essential facts. After exiting the cab a bit shakily, I put on my pack and discovered that my hotel was in the ancient, pedestrianized, cobble-stoned area, and several blocks away up a very steep street. Oh Joy, I thought halfway up, I’ll be the first dumb hiker in history to have a heart attack before he even reaches his hotel.

I survived, though, and was rewarded with this view from my window at Hotel Ramuntcho. That blue mountain range at the left of the picture is the ridgeline I’ll soon be crossing.

I decided the right thing after a near-death experience was a rejuvenating beverage, which luckily I was able to find quickly.

The town is a tourist mecca and the “base camp” for the Camino route known as “The French Way” or Camino Frances. There are six other major routes, from Lisbon, Madrid, along the north coast, etc. Ten percent of peregrinos opt to start here.

A note on language: I’m now in France and am now experiencing “language schizophrenia” due to having just dusted off my Spanish in Barcelona. In Spain, a pilgrim walking the camino is a peregrino, but here in France we’re called pelegrinos. Until I figured that out, I was wondering why so many shops seemed to be advertising mineral water.

Touristy or not, the town is really scenic and is a photographer’s delight. Shown above is the river that runs just outside the town’s walls. 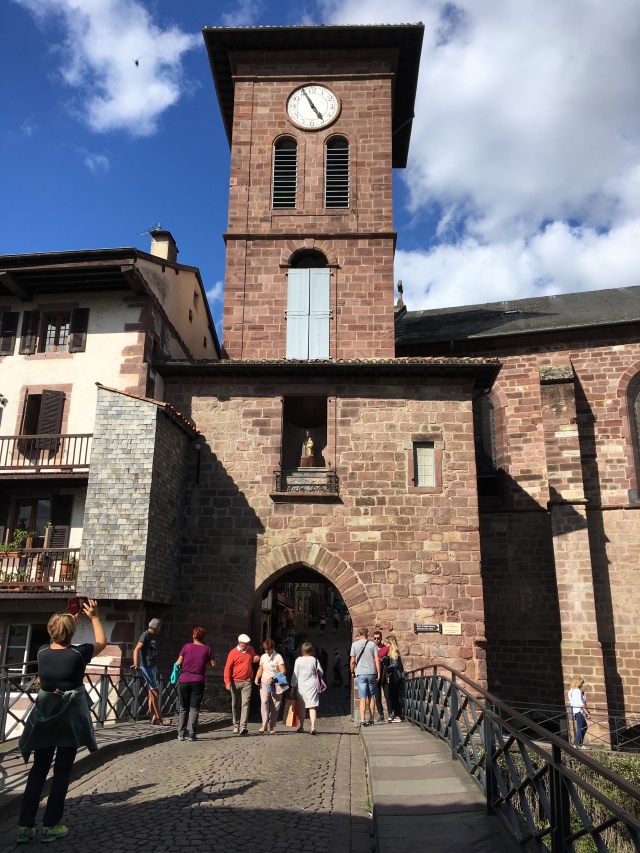 This is the gate in the old town walls through which all pere/pelegrinos pass to officially begin their hike (coming toward us), passing over a bridge and then up the cobbled road out of town. That will be me on Monday morning.

France and Spain recognize the historic importance of, and significant tourist dollars brought in by, the Camino. The authorities that maintain the Camino routes work hard to ensure that the way is well-marked, in towns, cities, and the countryside, as you will see in the next six weeks.

Like many Christian symbols and practices, the association of the scallop shell with the Camino predates the arrival of St. James and Christianity in modern-day Galicia. In Roman Hispania, there was a route known as the Janus Path used by pagans as a born-again ritual and ending just beyond Santiago de Compostela, in Finisterre. Its starting point? The Temple of Venus, Roman goddess of love. Venus is said to have risen from the sea on a scallop shell, as depicted in Botticelli’s famous painting The Birth of Venus, and is associated with fertility rituals practiced along the route.

Say what!? Well, you may rely on me to promptly investigate and report any such rituals I encounter!

And on that happy note, we’ll see what Sunday in St. Jean brings tomorrow.

3 Responses to At The Camino Gateway