Back to Britain and Off to York

York,UK – And… I’m back in England and feeling at home. All things considered, it was a painless journey. I rarely travel in the summer high season, so it was a surprise to see the crowds at Dulles airport. Thank goodness for TSA Pre-Check: short lines, no messing around with shoes, belts, tiny bottles of liquids, or pulling out your digital devices. If you don’t have it, I highly recommend it.

Virgin Atlantic Upper Class, which I can enjoy only thanks to reward miles, continues to be excellent (although these upgrades have gotten much harder to get). Many things about it have gotten smaller over the years, though, to increase profits and satisfy 50% partner Delta. For example, there are now 32 seats in Upper Class, and they’re noticeably smaller. I think there were 24 in the past. I know, I know – I’ll not get much sympathy from those of you who always fly steerage.

As you also know, pre-trip planning stress and tension can almost negate the positive benefits of taking a vacation at all. But, for me, there comes a time when I’m finally in the air, enjoying a cheese plate and some port, when everything settles in and the world looks pretty good.

News Flash! The pre-flight anti-jet lag scheme I have been following for years (based on, it turns out, 1983 science) and thought worked well was recently shown to be completely wrong! So for this trip I abandoned it, and the results have been excellent. Go figure.

We landed at Heathrow at 7am, whisked through the packed Arrivals Hall using the FastTrak lane (another Virgin Upper Class perk), and went onto the Virgin Revivals lounge. No shower for me, but I had a snack and a reviving pot of tea and digested the Independent newspaper. I like the red-eye flight but it arrives so early that I often have to kill some time before getting on.

At 10am I took the Heathrow Express (packed with summer tourists) to Paddington, and then a nice black cab over to King’s Cross Station. I whiled away 90 minutes in the Virgin East Coast Trains lounge (yes, Virgin has its fingers in so many pies) and then boarded my train. Two comfortable hours of watching the lovely English countryside roll by brought me north of London to York.

Founded by the Romans, York is a historic town with a fabled cathedral that figured prominently in the religious and civil strife of the medieval era. It’s also home of the National Railway Museum, many great pubs and breweries, and it’s my son-in-law’s Master’s Degree alma mater (hello Ryan!). 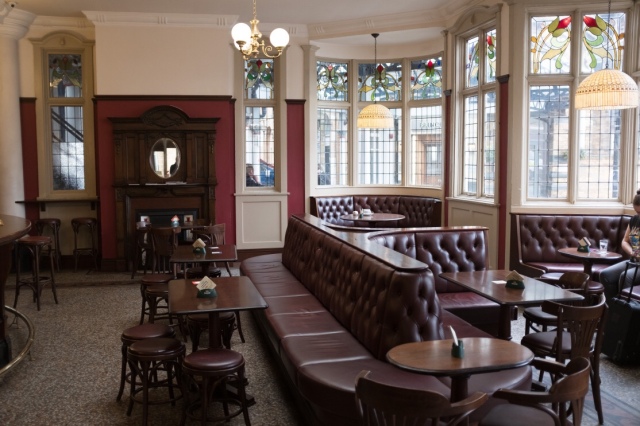 The York Tap is a perfect pub right at the rail station, with an “island” bar in its middle and beautiful stained glass. It was recently featured in a story in CAMRA’s Beer magazine. It has 16 real ales on tap (that’s “craft” beer, for you Yanks) and a very traditional feel. 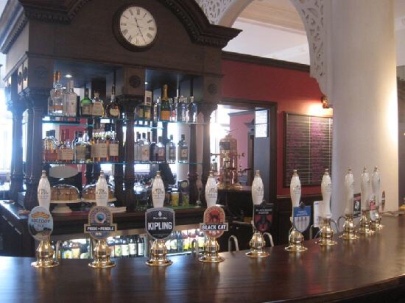 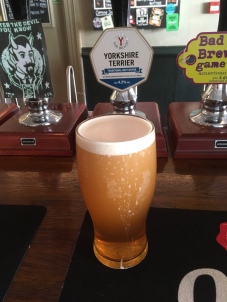 For example, it has no Wi-Fi, so patrons actually talk to each other, read (gasp) newspapers, and behave in a civil manner. And the beer is great – it was my very first stop after getting off the train.

I’m now planted at the Hampton Inn in York for the next three days. It’s a very standard Hampton, with its own room quirks, but with an outstandingly nice staff and a great complimentary breakfast. English Sausage! Weetabix! Cappuccino machine! Six pubs on the next street! It’s a tough job but someone’s got to do it. Today: Taking the free walking tour and seeing the medieval part of town known as The Shambles.