After a good night’s sleep at the Hilton, I fortified myself with a good breakfast at their lavish buffet. There’s a lot to like about this full-on spread and it has a lot more emphasis on healthy stuff (fruits, yogurt, etc.) than your usual American breakfast buffet.

After grabbing my hat and trusty shoulder bag (complete with Tube map, water bottle, and umbrella), I waddled down to the Underground station below The Lawn. This is why I like this location: a fine hotel right at a major rail station and on top of a big subway station – it’s extremely convenient. I joined late morning commuters on the Bakerloo and Central lines for a ride to Holborne Station and the nearby British Museum.

For the first time ever, I had to go through a new security/screening tent before I could enter the museum. This is a reflection of heightened terrorism concerns, no doubt. 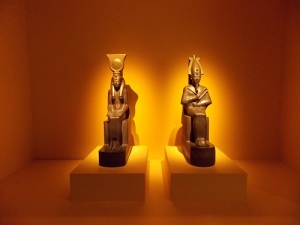 I proceeded into the museum and the special “Sunken Cities” exhibition. More than a thousand years ago, the cities of Thonis-Heracleion and Canopus, which lay at the mouth of the Nile near Alexandria, disappeared into the surrounding waters of the Mediterranean.

Named after the Greek hero Heracles, Thonis-Heracleion was one of Egypt’s most important commercial centers for trade with the Mediterranean world and, with Canopus, was a major center for the worship of the Egyptian gods. The exhibition includes hundreds of objects retrieved from the water that covered the cities after earthquakes and subsumed land. It was big, it was nifty, it was not crowded, and it was air-conditioned! Afterwards, I wandered through a few of my favorite galleries and then I got out of there before the midday crowd surge. 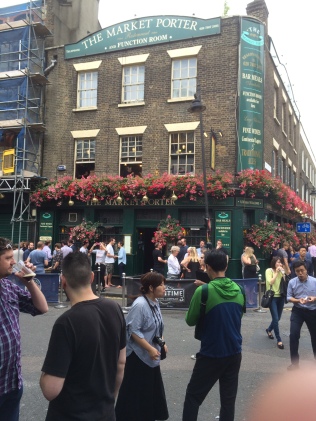 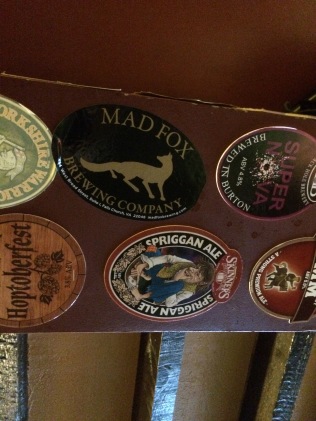 Another Tube ride brought me to the southern foot of London Bridge and a short walk to one of my favorite pubs, The Market Porter. This fine establishment has 12 taps with rotating real ales and four with ciders. Its walls are covered with pump badges and, now, with a Mad Fox sticker, courtesy of yours truly. The pub was featured in the latest Harry Potter movie, and the surrounding streets in many other movies, including Bridget Jones Diary. 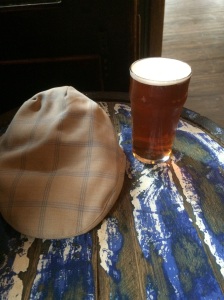 I have a favorite spot in the pub, a stool tucked into in a corner with a beer barrel for a table. From there I can survey the scene but avoid the mob, which gets pretty large by 12:30, and enjoy a few quality pints.

The Market Porter caters to the workers at the Borough Market across the street, and is therefore allowed to be open from 6-8:30am, which is most unusual. Then it reopens for 11am-11pm.

The pub’s food looks good as it passes by me, but I always save my appetite for something from the Borough Market itself.

Borough Market is a wholesale and retail food market and is one of the largest and oldest food markets in London. In 2014, it celebrated its 1,000th birthday. 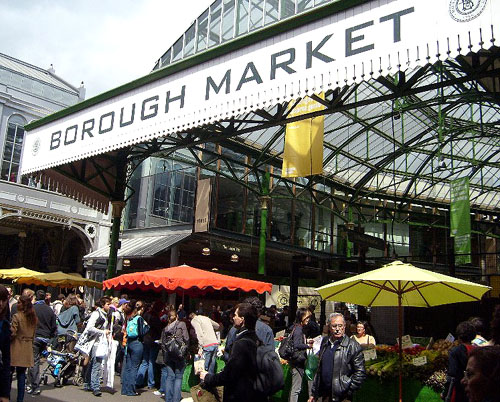 It’s big, it’s crowded, and it has amazing food. Lunch here is a must, whether it’s a free-range chicken wrap or a pulled-pork slider or a cheese and fruit plate. In truth, the real challenge is to avoid stuffing yourself silly.

After a late lunch, I took my traditional stroll along the Thames River Walk, past the Globe Theatre, the Millennium Bridge, and the Tate Modern museum. This is a popular walk way and very pleasant on a nice day. It also helped me digest lunch. I proceeded along to, and walked across, the Blackfriars Bridge, to the north shore with occasional stops to peer over the side at the ornate piers of an abandoned (or is it future?) railway bridge. Right in the vicinity is the famous Blackfriars Pub, in case you want to see it. I was sated, though, and semi-comatose so, instead of enjoying the pub’s great Art Nouveau decorations, I entered the nearby Underground station and took the District and Bakerloo lines back to Paddington.

I bought a few small items from the Paddington Sainsbury store for dinner and retired to my suite to reflect, write up some notes, and pack for the next day’s Virgin Atlantic flight home from Heathrow.