Port Issac is in Cornwall, a county in the far southwest of Britain. Like many counties, it has a rich history, an ancient language, and plenty of local pride. Here are a few things I learned while in Cornwall:

The Great Scone Controversy – Devon is a neighboring county and there’s a long-simmering argument between the two counties concerning how to properly prepare your scone.

Cornwall says you put the jam on first, then the clotted cream on top, while Devon says the reverse: clotted cream, then jam. Yes, yes, seems silly, but they take it seriously here. There was even a little reminder on my plate when I ordered a Cornwall Cream Tea at the Krab Pot Restaurant: 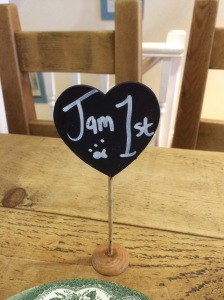 A national poll a few years back favored the Cornwall technique 57%-43%.

The Great Pasty Dispute – If that’s not enough, there’s also quite a bit of contention over who has the best pasty (that’s “past-ee”). A Cornwall pasty is folded over sideways and crimped along the side edge: 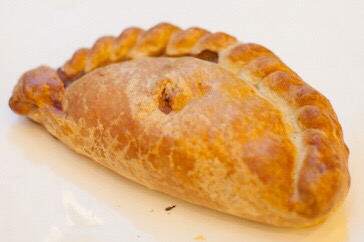 Devon’s version, however, is shaped more like a baked potato that’s been closed up and crimped along the top seam. Cornwall is even trying to trademark the name “pasty” – “Outrageous!” say those from Devon.

Brits Like Their Dogs – It seems Britains must bring their dogs with them on holiday to the seaside. Port Isaac was flooded with them – I counted 21 different dogs passing below my balcony in one 30 minute stretch on Sunday – and most were well-behaved, and well-policed by their owners. Many breeds, from tiny Dachshunds to giant Irish Wolfhounds, paraded by and it seems that most establishments, even pubs and restaurants, welcome them.

It’s Still a Small World – I encountered, in Port Isaac, in my small pub/hotel’s dining room, sitting two tables away, Mr. Tom van Poole, Yorktown High School, Class of 1970, and his wife Mimi (I was Class of ’69). They live in Arlington, Virginia, about 3 miles from me. We remembered each other pretty well and marveled at the coincidence. Tom sends a shout out to my other YHS alumnae friends.

Tomorrow: Back to the Great Western Railway for a ride to Bath.