My four days in Paris were spent in my usual hangouts: people-watching in Luxembourg Gardens, art-worshipping at the Orsay and Louvre museums, simply smiling at the Eiffel Tower, and lunching at the restaurant under the Art Deco dome atop the Printemps department store. Once again, the Fete des Vendanges (Harvest Festival) in Montemarte was something of a bust. 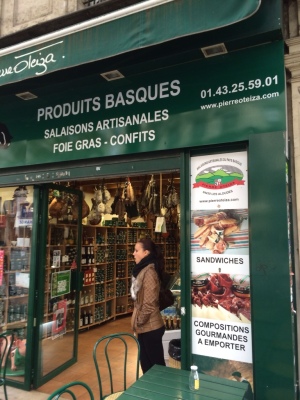 I did find this interesting store featuring products from the Basque area of Spain (hey – Phil and Marti, check it out) on Boulevard St-Michel. If you double-click the picture and zoom, you can see those are hams hanging from the ceiling.

One more item for the “In Europe, It's Not What You Expected” Department: I decided to send out two pairs of jeans to be cleaned. As we all know, washing and drying them also shrinks them a bit, solving that baggy look they get after a few days wear. Off I sent them, and back they came, dry-cleaned. So they are now very clean and still baggy. Oh well…

As usual, the Eurostar train was fine except we had to stop (yes, dead stop) short of the Chunnel to fix some outer panel door that had come open. Result: 1/2 hour late arrival into London. Also, discovered iPhone Location Services/Facebook has no entry for “under the middle of the English Channel”, which I think it should.

Ensconced at the Paddington Hilton, more proof the world is going to hell in a handbasket: no rooms available to upgrade me (a mere Gold Hilton Honors member, not Diamond or Platinum) to an Executive level room! Hasn't ever happened before in all the years I've been here. Between that and the difficulty upgrading my trans-Atlantic flights, I'm closer to joining the crowd that thinks these loyalty programs are becoming worthless. 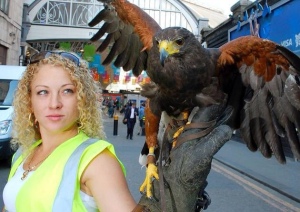 Paddington Railway Station is a vast, cavernous space which has a glass wall closing off one end into a food court, inside of which are open-air eateries and other stores. In the past, in this area they've had a problem with pigeons and every horizontal beam and other surface was festooned with those 5″ plastic spikes intended to keep them from roosting. Didn't help much in the past. This morning I spotted a fellow in a service staff uniform walking around with a hawk on his arm. Yes, a hawk. And then I noticed there was not a single pigeon to be seen anywhere inside the food court. What a concept: using a hawk inside an enclosed (though large) space to control the pigeons. Brilliant!

I'm off to my old home, Reading, today to visit some favorite old haunts and perhaps see the lads from our company office for a pint after work. Cheerio!